What are lasers good for?

The scientific definition of a laser is a source of light which is emitted in a continuous stream. The first lasers were invented in 1960, in America. The beam is concentrated into a small area, and makes the light more intense than conventional light sources, and this is why it has a much higher power density as well. Lasers are used for navigation, satellite technology, to guide missiles, to polish metals, and of course, there are medical applications as well.

Relatively strong lasers are used to burn the damaged and infected portions of the tooth off, leaving only the healthy bits. Cavities are basically holes in the enamel surrounded by infected tooth material that is eroded and probably discolored. The laser kills the bacteria, and destroys the infected tissue, leaving only a sterile hole, which can then be safely filled. Lasers can also be used to sterilize the root canals during a root canal treatment, as light can go in places where a physical object may not be able to. An elongated head with a laser can be easily placed in the root canal and after 2 or 3 minutes, the root canal will be cleared of all bacteria. The process is entirely pain free.

A very weak laser is used to remove stains and discoloration from the teeth. This is extremely rare, and most clinics that offer a “laser whitening” do not actually use lasers at all. These places usually use ZOOM! whitening, which is a blue scale light that is related to lasers in that it is a light source, but it is an indigo light that is not very concentrated, and thus is not a laser. Dental lasers are much stronger. The laser basically burns the bacteria in the plaque, making it fall apart and not stick to the tooth surface. 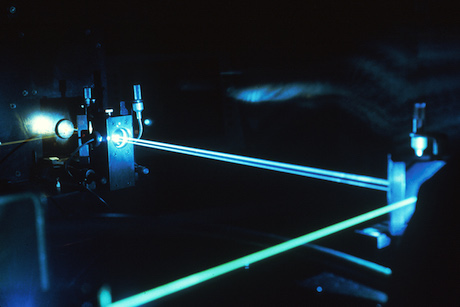 Currently, strong dental lasers are used only to burn out damaged areas. Currently lasers are still unable to work as well as scalpels. Although laser “scalpels” can be used to make small incisions, lasers currently lack the reliability and quality that would make them able to compete with handheld, traditional scalpels. This will change, and newer and better lasers are bound to come along, and they are destined to eventually overthrow the hand held varieties, and make them obsolete.

Currently the problem is not one of strength, as weapons grade lasers- capable of piercing armor from a distance- exist, as well as lasers that are so gentle that eye surgeries can be performed with them. The problem is that lasers are still very expensive and extremely rare and hard to find, and are not as of yet reliable enough to be used in medicine, an area which requires absolute surety and reliability, as people’s lives are literally on the line. Many areas of medicine, like dentistry do not have any protocols or quality controls set up for lasers or for laser manufacturers at all, without which it is impossible to introduce lasers with any kind of frequency into the public mind. Until issues about reliability and availability (not to mention price) are sorted or bridged, lasers will fill only the place they occupy now. Right now it is much safer, easier and cheaper to use hand instruments.

Lasers are usually less painful, and certain procedures do not even require anesthetic at all. Many patients also reported that the lack of a drill and the horrid noise it makes made them feel calmer and less afraid. The problem is that lasers cannot be used on teeth that have been previously filled.