Many of us have pondered the question: why do predators in the wild have such glaring white, beautiful teeth? They chew dozens of bones and eat pounds of meat each day, yet you never see any broken teeth, or any dull ones, either. This fills us with envy! How can this be?

It turns out there is no reason for envy, as new research has indicated that our teeth are just as, if not even more powerful than theirs! Our teeth are roughly as strong as a tiger shark’s teeth. The structure of our teeth does not resemble that of these large fish, but at least it gives us prettier smiles! The differences and similarities between our teeth and the chompers of sharks was the object of a study by Matthias Epple and his research team, in the German Duisburg-Essen University. Their findings are astonishing!

A Look At The Sharks

The research team used the shortfin mako and the tiger shark as the basis of their research. The second should be familiar to everyone as it is considered to be the most dangerous shark in the world. The teeth of these two predators are very similar but there are functional differences. The shortfin mako uses its teeth to grip its prey, while the tiger shark operates more like a can opener, as this species can use its jaws for lateral movements, not just up and down. Sharks have three types of teeth: the ones spoken of above which are straight and pointed, which they use to catch slippery prey and hold them fast. They also have molars, contrary to popular belief, which they use to crack open shells, turtles and bones or ligaments that may impede their feasting. They also have a their kind which resembles lacework, is very ornate, and they use it to slice apart larger prey, like humans. 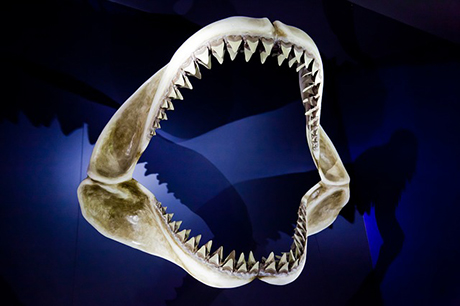 Although we cannot crack a turtle open with our teeth, there is no reason to feel inferior. Human teeth are not weaker than the teeth of sharks. Although sharks have an extremely tough enamel layer over their pearly whites, the human tooth has a special micro and nanostructure that has been a great advantage throughout our evolution.

What does that entail? Our teeth are made up of tiny crystals, and they have an incredibly stable structure. These crystals have protein molecules that stick to them and to each other, and they are less likely to become cracked or broken because of these proteins. When a trauma or some other force hits your teeth, this special structure will absorb most of the shock, making sure that your teeth do not crack. Sharks have much simpler tooth structures, basically consisting of a flexible dentine covered by a super hard layer of enamel. This enamel is made of fluorapatite, which is why it is so resilient, and our own enamel is made of hydroxyapatite, which is a much softer material. Nonetheless, this material is found all throughout our body, and is the hardest material found therein. Our enamel does not contain living cells, by the way, just a combination of fluoride, calcium and phosphorus.

They Have Less Carries

We can’t beat sharks in one respect, though, and that is in the realm of tooth decay. We talk of decay when the hard structure of the tooth becomes compromised. Decay starts out on the surface of the tooth, but will eventually reach the inner structures as well.

Unlike humans, sharks exhibit no signs of tooth decay at all, and there are biological reasons as to why. Basically, the entire surface of the sharks tooth is covered with fluoride, acting like a constant coating of toothpaste (most toothpastes are fluoride based). Our teeth have less than 1% hydroxy-fluoride, and that amount changes very little when we brush our teeth. The predators of the sea also have the advantage of changing their teeth every so often. Sharks have many rows of teeth, and new ones are constantly arriving from the back of the mouth. A shark can use up to 30 000 teeth in its lifetime, while we are limited to the same 32 for the rest of our lives. Certain species change one tooth at a time, while others periodically change their entire arsenal all at once. Sometimes they can do this in a matter of days, and sometimes it takes months for the change to be complete. The serrated teeth that sharks have also fall out quicker than human teeth, due to their not growing out of a jaw bone, but just being connected to the animals skin by way of a fibrous membrane.

It seems thats harks are a little bit ahead of us in their tooth game. One thing's for certain, though: good oral hygiene, regular checkups to the dentist and abstinence from sugary foods can keep us in the competition!