The fact that tooth decay is one of the most prominent diseases on the globe today is not very surprising. But it seems more likely that refined foods and sweets of our times are not the only cause of this problem. A body belonging to a hunter-gatherer was found in Morocco that is at least 13700 years old, and shows signs of tooth decay.

What do the teeth tell us?

People in the time that this man was living ate a lot of carbohydrates. Their teeth were in relatively bad condition, meaning that they must have experienced pain frequently. The American journal PNAS wrote an article on the matter, and I quote:

“The nerves do die at a certain point, but up until that point the pain is almost unbearable. if an abscess happens to form, the entire situation can become torturous, as the patient will feel immense pressure in their jaw. After a while the jaw perforates, the abscess cleans itself up, and this jaw bone shows signs of exactly this happening.”- so spake Louise Humphrey, who works for the Museum of Natural History in London.

The Prevalence Of Decay

Tooth decay and dental caries are of epidemic proportions in our modern society. They are caused by refined carbohydrates for the most part. In ancient times, this was not the case, and the turning point for our dentition came with the development of agriculture. When people started working on the land, the amount of plant matter they started eating rose significantly and with it, higher concentrations of carbohydrates. With the advent of technology, the amount of time it took to process plants into nutrient rich foods grew shorter, and larger and larger crop yields meant even more plant based foods, meaning even more tooth decay. This happened long enough ago that even hunter-gatherer societies suffered from tooth decay. 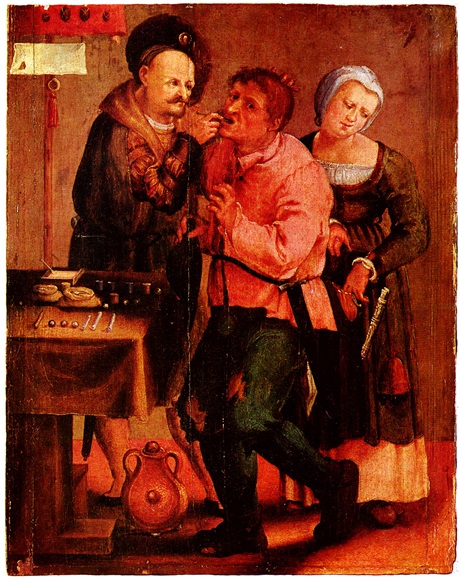 What Marocco Has To Teach Us

In the past ten years, in a tiny cave system called Galambok in the Eastern part of Morocco, archeologists have found scores of ancient skeletons. 52 of them have been reconstructed and scrutinized by researchers of various fields. The skeletons are dated to have lived between 13700 and 15000 years. All but three of the skeletons showed signs of tooth decay, and even very severe cases of oral disease have been identified. Some of the jaws even showed signs of having been infected with an abscess.

How Our Ancestors Lived

Aside from the skeletons, there were also the remains of wild flowering plants as well. Based on the things found inside the caves, early man ate a lot of pistachios, sweet acorns, pine nuts like the ones found in pesto today, and also snails. It is likely that some method of oral hygiene was used even back then, but this kind of food is ideal for the growth of bacteria, and our forefathers probably had really bad halitosis as well.

The researchers say that according to the skeletal structures, these people still gathered plants, but were already starting a semi-sedentary lifestyle. Evidence for this are the long and narrow coffins they were found in, and the trash heaps that archeologists found the plant remains in.

Humphrey also warns that the people who were found at the Moroccan site might have changed certain aspects of their teeth for cultural reasons. 90% of the skeletons had had their canines extracted, when no sign of extraction of decayed teeth were evident in any of the skeletal remains.