Before the XX.th century dentistry was for the most part completely unregulated. Many times monks dealt with dental problems, as they were the only people who understood anything about the human body. One of the first recorded attempts at regulating the trade comes from the 1400s from what is present day France, when it was said that only the guild of barbers were allowed to do certain dental procedures, mostly extractions. The first dental school was started in the United States in the 19th century, and shortly afterwards, regulation about who can and cannot perform dentistry was introduced, which was backed up by sufficient legislation. But there are plenty of illegal dentistries left in the world, and many countries rely on this kind of practice for their daily tooth care.

In the latest polls it was estimated that some 78% of Pakistanis do not have access to regular health care, and private dentists are way too expensive for most people to afford. Because of this terrible situation, some 13000 street dentists sit on the streets, day and night, of basically every major metropolitan area, waiting for patients, who come to them in droves, because of lack of institutionalized medicine. The “dentists” who work on the streets offer quick and cheap work, but they very rarely have qualifications, and often the safety and hygiene procedures are rather questionable. According to “experts”, dirty gear that has been used on several patients can cause hepatitis and other life threatening infections, but patients are willing to undergo these potentially life threatening procedures because they are dealing with incredible pain, and this is the only form of alleviation available.

To understand this situation, it is important to know that Pakistan has no health care system, so many Pakistanis pay for their own health care out of pocket. Pakistan spends less than 1% of its GDP on healthcare, which is about 4% of its total state budget. The government has a hard time producing even rudimentary health services, let alone advanced dentistry. With inflation and the cost of living rising, the poorest sectors of society struggle merely just to stay alive, and dentistry and nice teeth seem like a luxury that is far away and unattainable.

This is why street dentistry is a booming business. The authorities have tried to crack down on illegal dentistries, to which these dentists reply by packing their stuff and moving to a different street. Many poor districts need this kind of help, and the poor are willing to pay for their services. Although many people know that there are state owned hospitals you can visit for free, the sad reality is that many times these places are inaccessible to the layers of society that most need it.

Pakistan also has modern, elegant dentistries, but only a small elite section of society will ever see these places from the inside, and thus they do not count as a considerable public health measure. Dentists also complain that they are forced to charge so much because importing goods is so incredibly expensive, and because so many things need to be imported because of poor conditions in Pakistan. A normal dentist chair costs the same as a luxury sports car in Pakistan, and many such cars park in front of private dentistries in Pakistan. 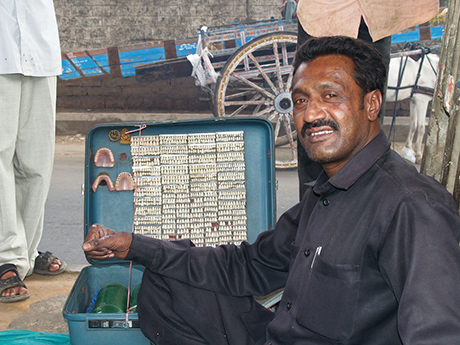 In India, a run of the mill dental treatment can be had for roughly one dollar. An extraction costs about two bucks in Indian rupees. Most places are very poorly equipped, and the instruments are frequently rusty, making the procedures quite dangerous indeed. Although it seems unthinkable, frequently the dentists will use the instruments directly from one patient to the next, or may even implant a tooth or crown that does not fit into another mouth. Most unsanitary. According to many Indian street dentists, the only difference between them and a dentist with a diploma is that they cost more money and have x-rays and nice places to sit, instead of having to sit on the street.

Most of India is still densely populated and incredibly poor, and the poorest in these societies can only get the care they need in these poor conditions, much like in Pakistan.

But in India, many of the street dentists have diplomas, and finished in college. Many times their families were able to pay for their tuition, but then ran out of money, and after struggling with unemployment, they frequently cannot open their own clinic. India boasts of 80 000 legitimate dental clinics, which is a huge number but seems staggeringly small if you consider that 11 000 dentists receive their diploma each year from universities in India. Most street dentists do not have a diploma though, and learn the tricks of the trade from others in the trade.